“★★★★★ This is the hit of the Fringe, the real Fringe, the fringe that takes no prisoners… it’s anarchy in the underground and if you want the ultimate fringe experience you better grab a ticket quick!” -Matt Byrne, The Sunday Mail 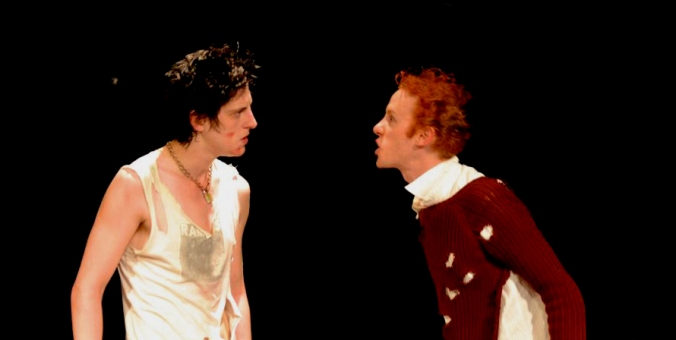 Winner of the 2012 Montreal Fringe festival’s Next Stage Award, Vicious Circles is a meta-euphoric and surrealist-psychedelic tale about icon of punk and bassist of the Sex Pistols, Sid Vicious, and the tug of war for his life between his band mate, Johnny Rotten, his manager, Malcolm McLaren, and his girlfriend, ‘Nauseating’ Nancy Spungen, at New York’s Chelsea Hotel.

“This is a take-no-prisoners Fringe show that leaves you knowing you’ve seen something great and got your money’s worth. Even if punk is not your cup of tea, this is pure entertainment. ★★★★1/2″ – Adelaide Theatre Guide

“I enjoyed every minute of this.” – Indaily

“skilfully directed  …extraordinary performances …darkly entertaining …Not to be missed, Adelaide. ★★★★1/2″ – From The Turnstiles

“Sid, Nancy and Johnny are interpreted to a T” – The Charlebois Post

-Nominated for the 2012 Chapters Award for “Best English Text”.

“Patrick Rogers is just amazing as Vicious. Sure he’s ranting and raving but he also gives you glimpses of the lost boy hiding behind the swastika t-shirt. When he grabs the mic stand and does My Way, time stands still. Shane Adamczak is also something else as Rotten. He has the singer’s posture and stage moves down-pat – when he suddenly starts lip-syncing to No Feelings, it’s sheer genius.”  – The Montreal Gazette

“And Johnny Rotten… wow. If there was ever a better, more sinister and scowling and sneering and contemptuous personification of punk-era Lydon, I would love to see it… because Shane Adamczak is perfect. Absolutely perfect” –Festival Freak

VICIOUS CIRCLES – From The Turnstiles (Feb 2014)

VICIOUS CIRCLES – The Montreal Gazette ( May 2013)